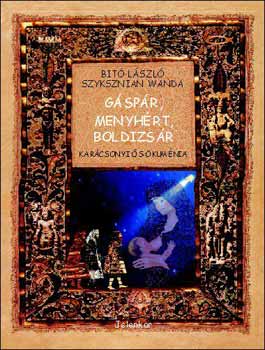 My original story appeared in the Christmas supplement of the Hungarian newspaper Népszabadság in 2005 under the title: “Gáspár, Menyhért, Boldizsár”.
This inspired the outstanding graphic artist, Wanda Szyksznian, to design a picture book for all ages. It turned out to be a joint project, during the course of which I further developed the story. After much work, the book was published in October of 2006. The original Hungarian text was translated by Ivan Sanders with my cooperation. /László Bitó/

A Common Creed Christmas Story for all Ages 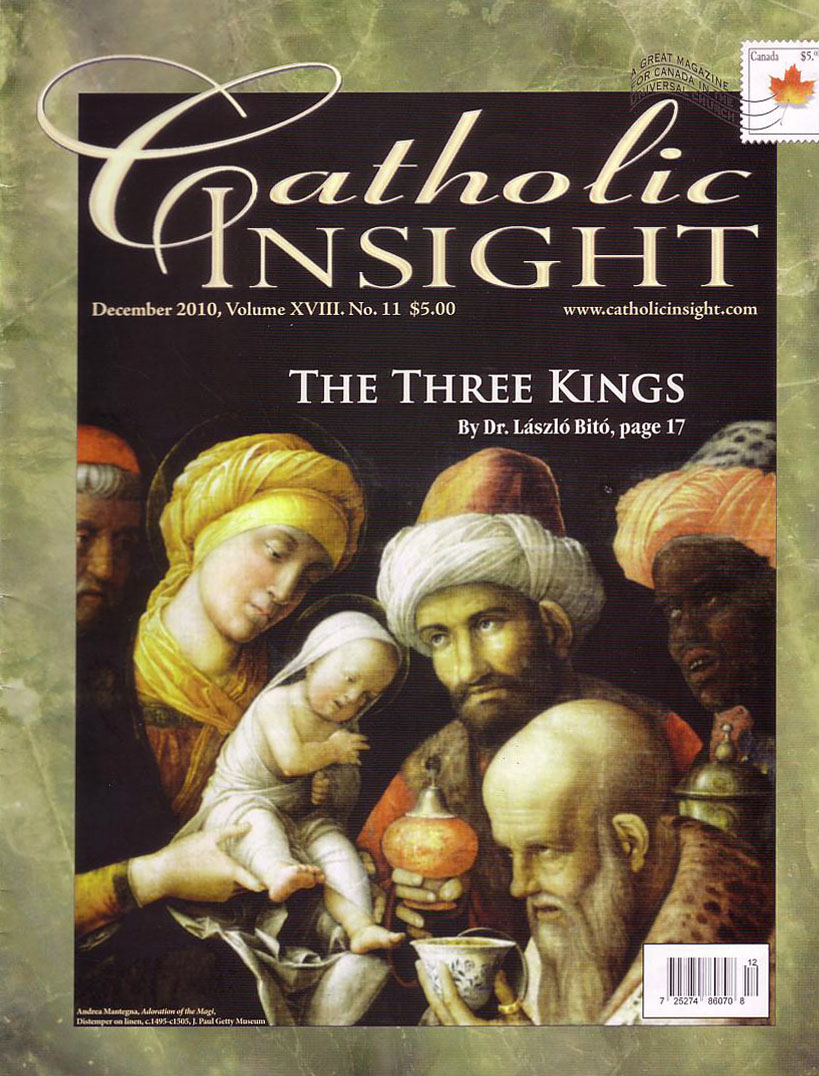 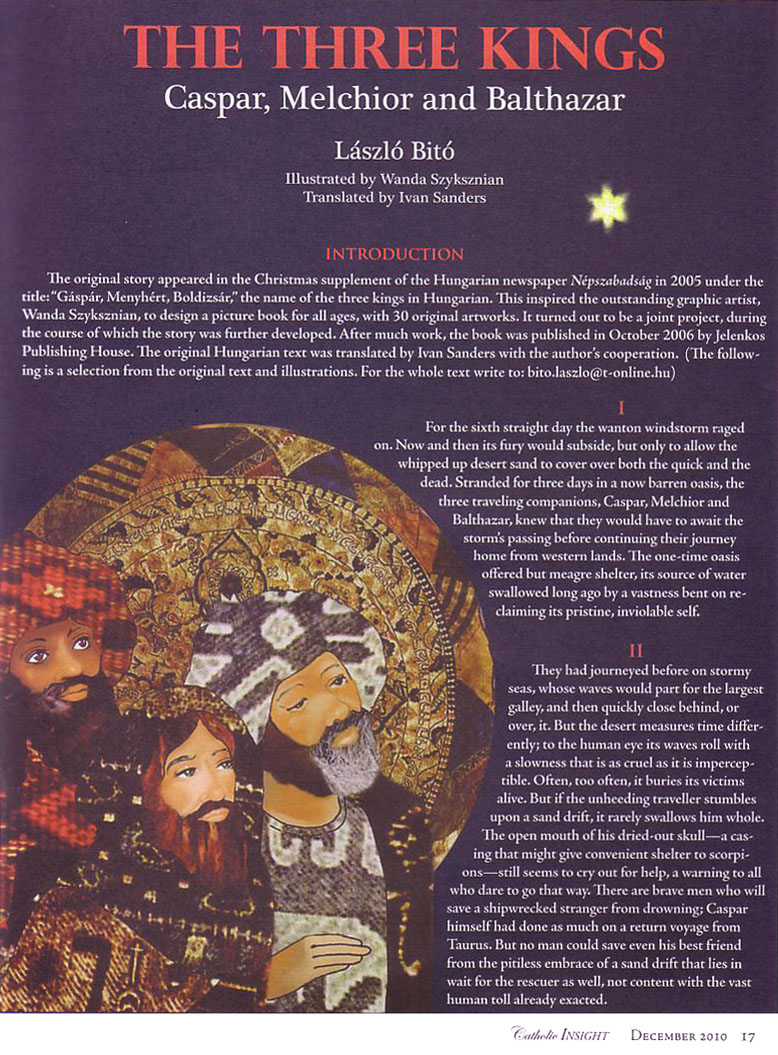 Preface to the English translation

My original story appeared in the Christmas supplement of the Hungarian newspaper Népszabadság in 2005 under the title: “Gáspár, Menyhért, Boldizsár”. This inspired the outstanding graphic artist, Wanda Szyksznian, to design a picture book for all ages. It turned out to be a joint project, during the course of which I further developed the story. After much work, the book was published in October of 2006. The original Hungarian text was translated by Ivan Sanders with my cooperation.

A Common Creed Christmas Story for all Ages

Selected portions of the English translation by Ivan Sanders with Laszlo Bito’s cooperation. 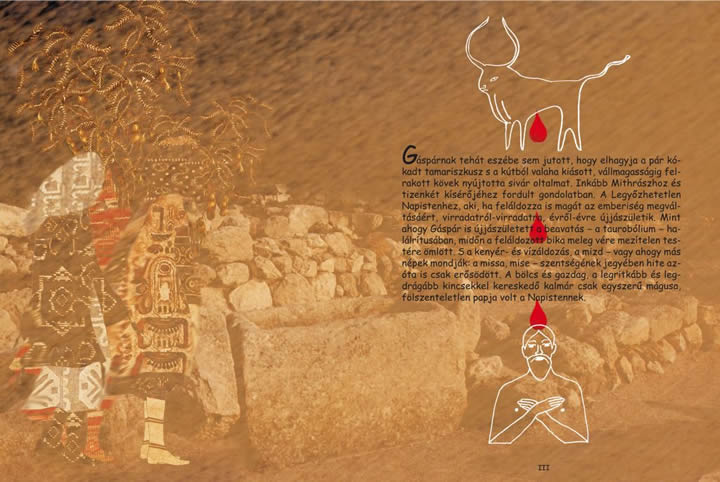 It never occurred to Caspar to give up the meager protection provided by the few wilted tamarisks, and by stones dug out of the well long ago and stacked now shoulder high. Instead, he turned in his thoughts to Mithras and his twelve companions: to the invincible Sun God, who sacrifices himself each night, and is reborn in the morning, for the redemption of mankind. Caspar, too, had been reborn at his initiation into the Taurobolium, in a rite of death and rebirth during which the warm blood of the sacrificial bull washed clean his naked body. Touched also by the grace of the bread-and-water sacrifice called mizd—or missa, or mass, as it was known by others—his faith had grown ever stronger. A wise and wealthy merchant dealing in the rarest and costliest treasures, Caspar was also a simple magus, an anointed priest of the Invincible One. 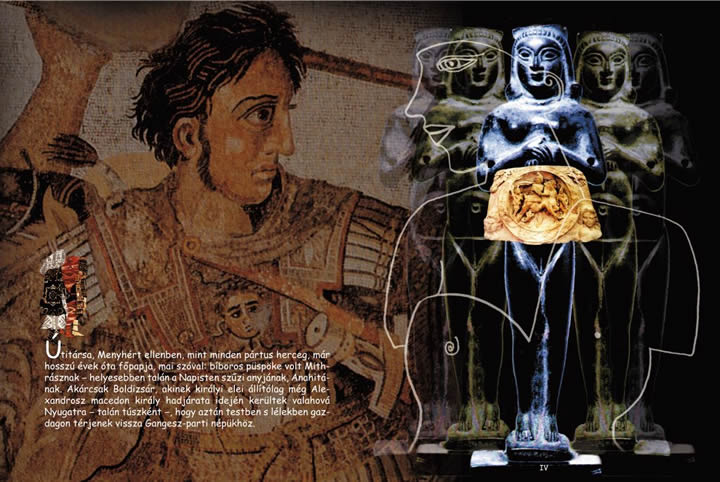 On the other hand, his traveling companion, Melchior, like all Parthian princes, had been for many years a high priest (in today’s parlance, a cardinal bishop) of Mithras and also of Anahita, Mithras’s virgin mother. The same was true of Balthazar, whose royal forebears were said to have been driven westward as hostages, perhaps during one of the campaigns of Alexandros, the great King of Macedonia, only to return later, enriched in body and soul, to their people near the banks of the Ganges. 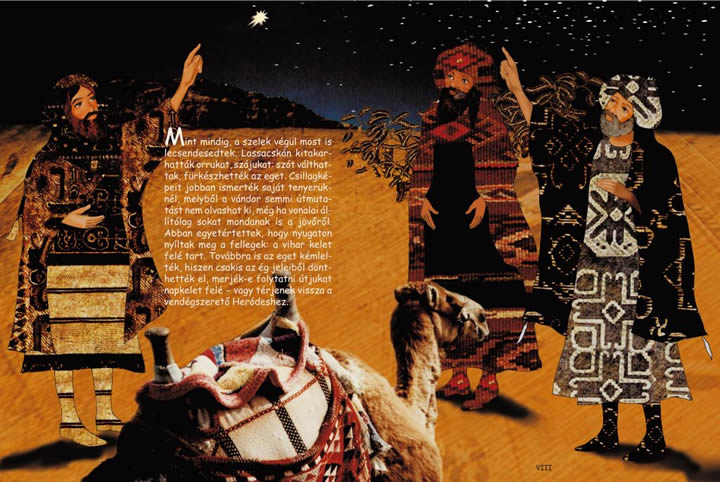 Melchior and Caspar, too, rejoiced at the thought of such an uplifting custom, and in this too they let Balthazar take the lead. As soon as they emerged from the desert, Balthazar stopped people to ask where they could find a child, born in the days of the festival of the Undefeatable Sun. “Sol invictus,” he kept repeating, for he did not know the language spoken by local Jews, which was quite different from the Galilean dialect they were familiar with. Finally he was able to make himself understood by three shepherds who were in the pasture with their flocks. They told him how to reach the town known for its grist mill, and – to none of their surprise – it was in the very direction where Balthazar’s guiding star was pointing. Only a few days ago, the shepherds explained, a young girl heavy with child traveled that way with her man. They should inquire as soon as they arrived in Bet Lehem: an expectant mother like that could not have gotten much farther. 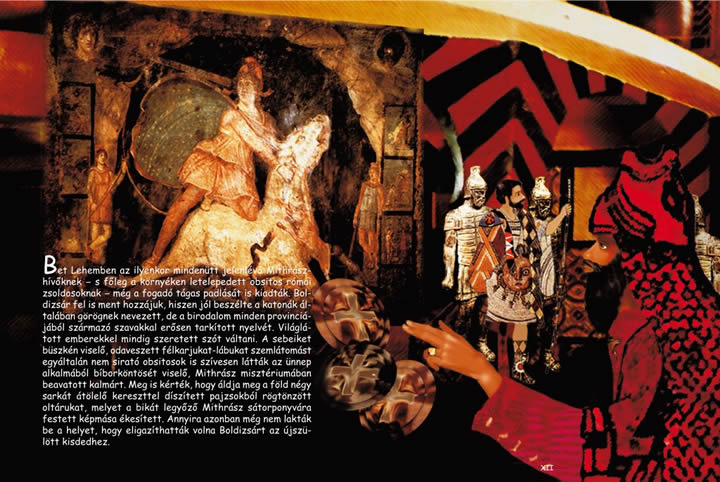 In Bet Lehem the roomy attic of the inn was rented out to Mithras believers who descended on the town at this time of year. They were mainly Roman mercenaries who after their discharge from the legions had settled in this area. Balthazar went up to them, for he spoke fairly well the language called Greek by the soldiers, which in reality included borrowings from every tongue spoken throughout the Empire. He always liked to converse with men who had seen the world. And these seasoned veterans, who bore their battle scars proudly and did not seem at all despondent over lost limbs, were likewise happy to see the merchant who on this festive occasion wore his resplendent crimson robe, and was well-versed in Mithras’s mysteries. They asked him to bless their makeshift altar, built from their shields decorated with crosses that embraced the four corners of the world. Their improvised altar was also adorned with an image of Mithras conquering the Bull, painted on tent cloth. However, these veterans were not familiar enough with the place to be able to guide the three men to the newborn babe they had heard about. 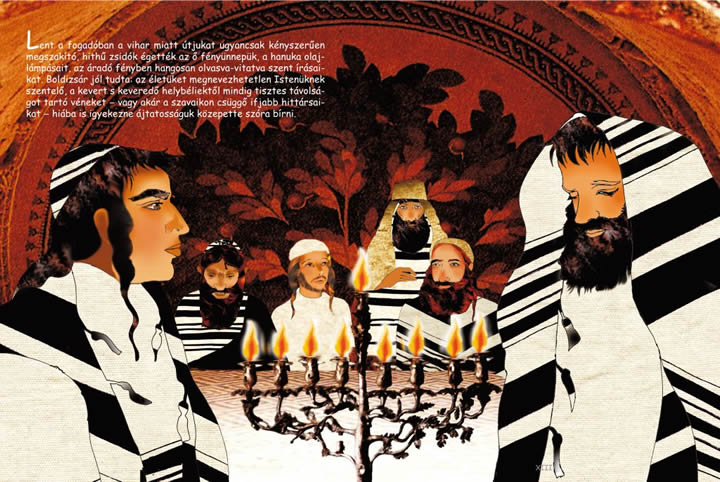 Down below, in the inn, pious Jews, who were also forced by the fierce storm to break off their journey, had lit the oil lamps of their Festival of Light, and in the spreading glow of Hanukkah were reciting their holy script, arguing loudly over its every word. Balthazar knew well that these people, who dedicated their lives to their unnamable God and distanced themselves from the rather mixed local populace, could not be disturbed with trivial queries about directions, especially not during their devotions. 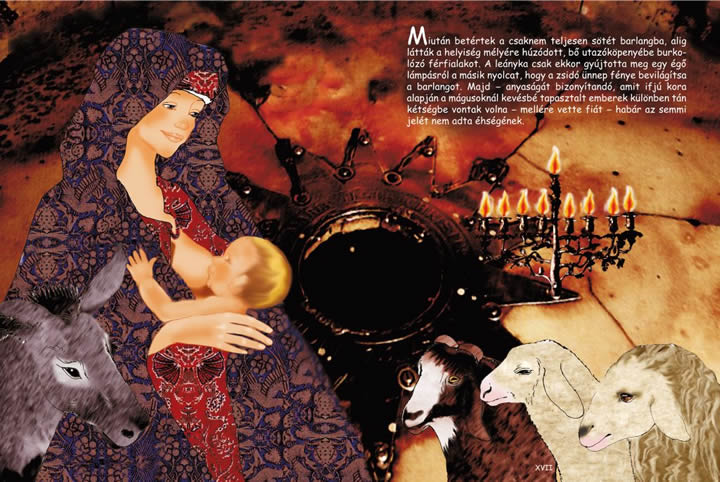 When they entered the almost totally dark cave they could hardly make out the male figure that retreated deep inside the cavernous space, wrapping himself in his loose-fitting traveling cloak. Only then did the young girl light from one burning lamp the other eight, so that the light of the Jewish holiday could illuminate the front of the cave. And then, almost as if to prove that she was indeed a mother—something that, by virtue of her very young age, anyone less experienced than the magi would probably have doubted—she drew her son to her breast, though the infant showed no sign of hunger. 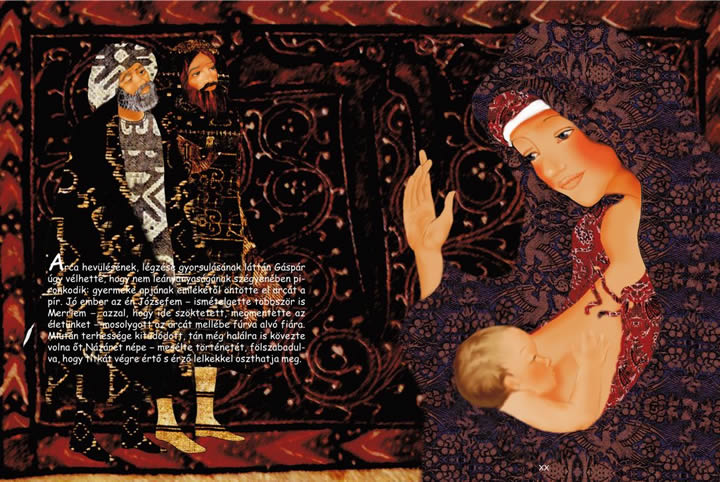 Seeing her flushed face and quickened breathing, Caspar surmised that what made her blush was not her shame as much as the memory of the child’s father. “My Joseph,” Merriem said more than once, “is a good man; by bringing me here, he saved our lives.” As she said this, she smiled at her son who, burying his face in her ample bosom, slept peacefully. After learning that she was with child but without a husband, she went on, the people of Nazareth may well have stoned her to death. She was plainly relieved to be able at last to share her story with kind and understanding souls. 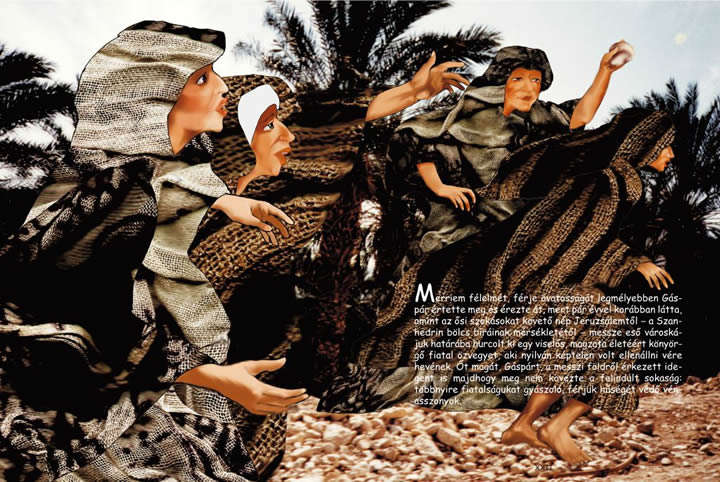 Merriem’s fear and her husband’s wariness were best understood and most deeply felt by Caspar. Several years earlier he had seen with his own eyes—in a place far from Jerusalem and the moderation of the Sanhedrin’s wise judges—a crowd, following ancient customs, drag a young widow heavy with child all the way to the edge of their little town. The unfortunate woman confessed that she’d been unable to resist the urging of her body and for that she was ready to accept punishment. She was tearfully pleading only for the life of her child. 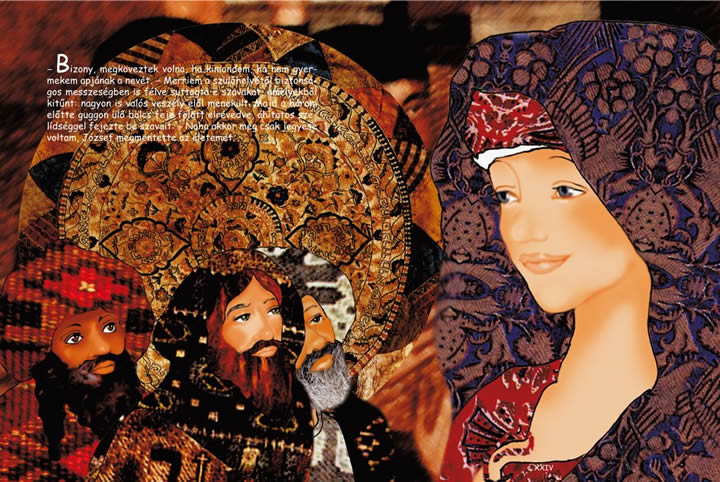 “They would have stoned me for sure, whether or not I came out with the name of my child’s father.” Even at this safe distance from her home town, Merriem spoke fearfully, in a whisper, which made it clear to the visitors that the danger from which she had fled must have been real. Then, looking dreamily over the heads of the three wise men crouching before her, she concluded with devout tenderness: “Although he was only my betrothed then, Joseph saved my life.” 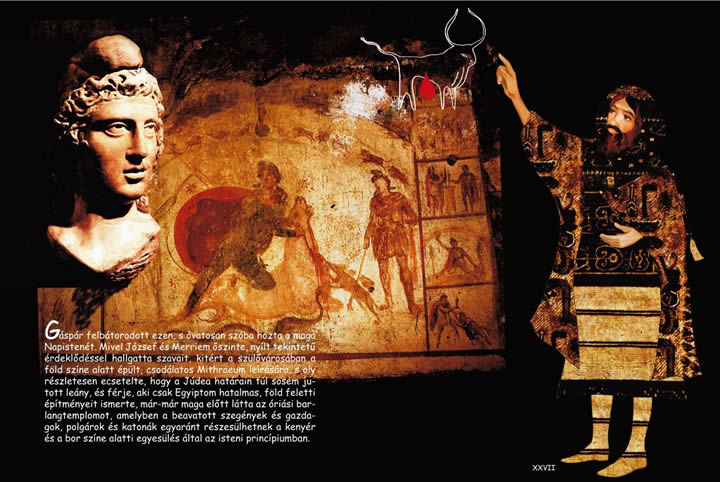 Encouraged by all this, Caspar spoke to him of their always victorious Sun God. And as Joseph and Merriem listened to his words with earnest, wide-eyed curiosity, he began to describe the amazing Mithraeum, built underground in his native city, and went into such detail that the girl who had never been beyond the borders of Judea and her husband, who knew only about the gigantic above-ground structures of Egypt, almost saw before their eyes the huge temple of an enlarged cave, in which all the initiated, rich and poor, soldiers and city dwellers, partook equally—through the unifying mystery of the bread and the wine—of the most divine essence. 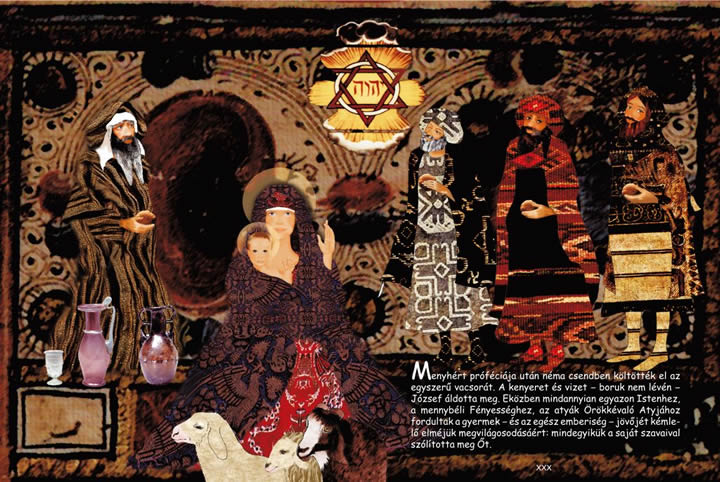 After hearing Melchior’s prophecy, the bread and water – they had no wine – was blessed by Joseph. In the reverent silence that followed, they all turned to the same God, the Heavenly Brightness, the Eternal Light, the Lord of the World, praying for their minds’ enlightenment as they contemplated the future of the child, and praying, too, for peace among all the tribes on earth. They each addressed the Holy One with words that sprang from their own hearts.

Availability in other languages

About — Awards and Honors